If you don't know by now, Hugh Freeze is now Auburn football's head coach, despite receiving plenty of backlash prior to it being official. Freeze signed a six year $6.5 million contract, which makes him the 8th highest paid coach. Here are some reasons why Auburn made a huge mistake.

Prior to this contract being finalized, an alleged victim of sexual assault from Liberty University asked Auburn to reconsider. 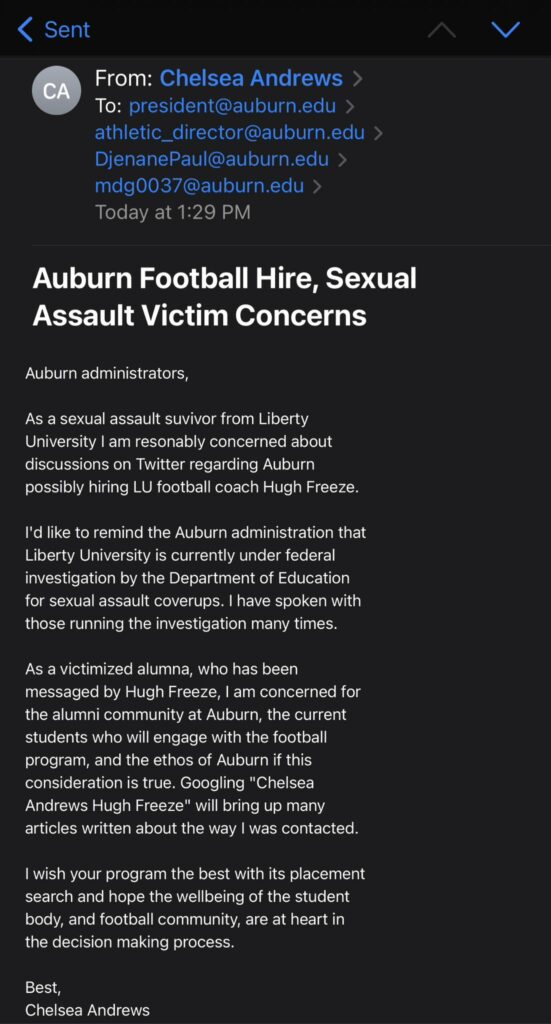 This email came from Chelsea Andrews, who is the sexual assault survivor from Liberty University.

Liberty University is under federal investigation by the Department of Education for sexual assault coverups. This investigation stems from another lawsuit against the school which accused officials of mishandling sexual assault allegations, while also claiming that the university's strict religious policies made sexual assault more likely to occur.

Get our free mobile app

Andrews was one of the 12 victims involved in this lawsuit, known as Jane Doe 7.

Katie Dalmasso, 32 (27 at the time of this interview), told USA Today of a story about her in eighth grade wearing a Grateful Dead T-shirt, which violated dress code.

"Coach Freeze pulled me into his office and told me that my shirt represented drugs," Dalmasso explains. "I said, 'I'll go change in the bathroom,' and when I said that, he said, 'No, you're going to change in here so I get the (Grateful Dead) shirt and you can't have it back.'

"He didn't do anything sexual. But I stood in the corner and faced the wall when I did it and I changed out of my shirt. No privacy."

A second woman, who remains anonymous, said that Freeze was "hyper attentive" to skirt lengths and stayed in the parking lot while she went to change.

She explains that students had the option of being paddled or receiving detention, and she chose to be paddled. She was "shocked" when he administered the paddling and not a female teacher.

"(Freeze) did some bizarre warm-up taunt before actually making contact. I was humiliated that he didn't have a female in the room.

"I don't know if the acts were intentionally sexual or if he was really that oblivious to the inherently sexual nature of his approach to discipline."

Auburn has chosen to ignore these accusations and lawsuits in order to hopefully have a better football program. They chose to ignore the women and their voices.

Women's voices deserve to be heard and listened to. Victims of abuse are already shamed and told they are making it all up. Especially women, and especially women in the deep south are shamed in this way. It is a shame what Auburn has elected to do.

Frankly, women always receive the short end of the stick when it comes down to sexual assault charges. According to RAINN.org, out of 1000 sexual assaults, only 310 are reported to police, 50 lead to arrest, 28 cases will lead to a felony conviction, and 25 perpetrators are incarcerated.

One of the main reasons why so many assaults go unreported is because of people like Hugh Freeze who will accuse the survivor of lying.

An incident similar to this actually occurred at UA in 2015. According to the Crimson White, a former UA student died by suicide in 2016 after alleging rape against T.J. Bunn Jr. After the assault occurred, she returned home before taking her own life. This happened due to her depression, anxiety, and PTSD, as well as her feeling betrayed by the people she thought were going to help her. Furthermore, students, the media, officials, and lawyers were accusing her of lying about the assault, which further encouraged her to transfer to a different school. It is unfortunate that people still accuse survivors of lying about assault.

Protesting Hugh Freeze's hire may not change a contract. However, it will be a reflection of the sentiment towards Auburn Athletics and the university as a whole for this decision they made.